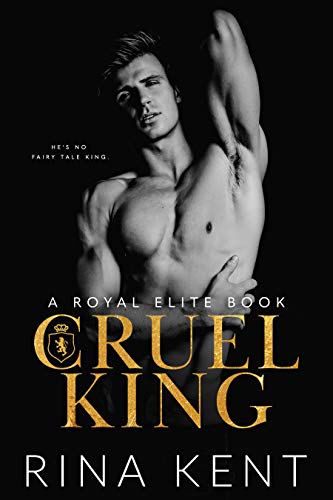 Here, little princess. I’m your king.
You have three rules. Bow. Break. Bend the knee.
Fight me all you want, but soon enough, you’ll be chanting long live the king.

Astrid
One day I’m Royal Elite School’s small fly, the next I’m hunted and left to die.
He doesn’t only shred my life to parts, but he’s also coming after my heart.
He thinks he broke me, but the new princess will bring the king to his knees.

Aside from the previously published book, this version contains a never-published-before bonus scene.
Cruel King is a complete standalone in Royal Elite world. No book should be read prior to this.

Disclaimer: This is a mature new adult romance, and contains dubious situations that some readers might find offensive. If you’ve been looking for a hero, then you won’t find it in Royal Elite. If you, however, have been itching for anti-heroes and villains, then welcome to their royal court.

Cruel King is technically the first book in the Royal Elite Series by Rina Kent. This book is an introductory book while also following a relationship between Levi King and Astrid.

At Royal Elite School (RES) the King name is one that isn’t to be messed with. The King’s live by the code of pure viciousness. Levi King, being the most popular man at RES, has everything in the palm of his hands. From the football scholarship to the flock of ladies at his beck and call…. That is, until one night he sets his sights on something that is out of reach… Astrid… and if anyone touches her, they’ll have to deal with the King of RES’ wrath…..

Grieving the death of her mother, Astrid finds herself pushed into a world where the only thing that matters is your wealth and the power you hold. Astrid decides invisibility is her only way to survive Royal Elite School. That is, until she catches the eye of RES’ most Elite student, Levi King. If she thinks the avoiding and ignoring tactic will work, it won’t. It just makes the hunt that much more thrilling for a King.

But Levi is hiding some pretty dark secrets that have the power to impact everything they are slowly starting to build. Only time will tell…

Can I say, I’m obsessed with this series, even though I’ve only read one book so far?! Holy Hell, Rina Kent knows her way around writing a thrilling suspense with loads of action and suspense. I couldn’t put Levi and Astrid’s story down. Each time I thought I was at a safe place where I could easily set it down and pick it back up in the morning…. ALL HELL WOULD BREAK LOOSE!! I was constantly on the edge of my seat with these two!

I really don’t want to give spoilers away, so I’m going to end this review by saying, If you’re looking for a sweet romance with loads of heart eye emoticons and cute moments…. THIS IS NOT THAT NOVEL! If you are looking for a romance driven by darkness with an uncanny array of twists and turns…. Buckle up buttercup, it’s about to get crazy.

Next up is Aiden King’s story!! EEK! It’s been a long damn time since I last felt this much excitement to binge a character’s romance story! I can’t wait to dive into Aiden’s mind and find him falling helplessly and hopelessly in love. It’s time this stone of a man’s shell cracks…. Just a little bit.