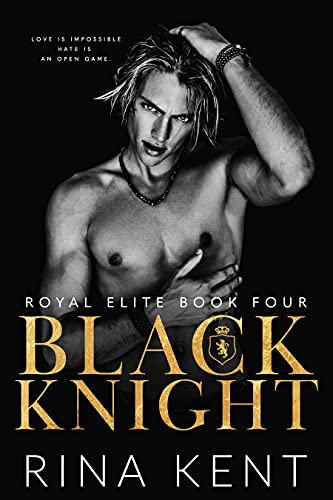 Love is impossible. Hate is an open game.

Kimberly
He was once my best friend, now he’s my worst enemy.
Xander Knight is heartbreakingly beautiful.
Ridiculously popular.
Brutally cruel.
He’s a knight but won’t do any saving.

Xander
We started as a dream, now we’re a nightmare.
Kimberly Reed is pathetically fake.
Terribly innocent.
Secretly black.
She can hide but never from me.

Black Knight is part of Royal Elite Series but could be read on its own. For better understanding of the world, you might want to read the previous books first. This is a high school bully romance, mature new adult, and contains visceral mental health situations that some readers can find triggering.

Xander has lived his life in the shadows of his father’s political career. He once remembered a time where he felt love and he felt light-hearted, but that all disappeared one fateful night when he was eleven years old. Now the little girl (Kimberly) who used to be his best friend, is his sworn enemy. He made a vow to himself all those years ago, to push her away and keep pushing until she gets the hint. Now, there not kids anymore, and all the hurt and bullying has left it’s mark on Kimberly’s heart and soul.

Kimberly once knew what it felt like to be happy and free. She had the doting father and the best friend who would do anything for her. But one night, all of that went to hell in a handbasket. Xander was no longer the boy she admired. Instead he became a vengeful monster. Now, Kimberly isn’t the free-spirited girl she once viewed herself as being. With the dark monsters lurking in the corner of her brain, she is finding it harder each day to not surrender to the darkness that threatens to rip her soul away and end her life. If only she had someone in her corner to help her see the light through all the darkness. But that boy is no longer her friend, instead, he’s the one who woke up the monsters. The other half belongs to her mother.

But what happens when Xander finds out, pushing Kimberly away all these years and tarnishing her soul, was for nothing. In the dark of night, the only thing that gets uncovered are secrets….

Let’s start with the content warning. If you find high details of Eating Disorders, Suicide, Cutting, Prescription Medication Abuse and Alcohol Abuse to be triggering, I highly warn you NOT read this novel. Given that this is a standalone in an interconnected series, I’m pretty sure you’ll be fine with skipping Xander and Kimberly’s story. The detail is traumatic, actual scenes are portrayed. So again, I warn you, if you find any of the above situations to be triggering, and decide to read anyway, read at your own risk. Only you know what you can handle and what you can’t handle. Just know the details to each trigger are highly detailed

I’m not going to lie, the last quarter of Black Knight was a tad bit f’d up…. When I said Rina Kent throws twists in the midst of things, that was an understatement…. This twist was more like an onslaught of inner turmoil wrapped up with deep emotions. I felt the emotional whiplash like a slap to the face. And that’s all I’m going to say about that, given that it’s a huge spoiler…

Xander Knight wasn’t as bad as I had thought he would be. As an outsider, you clearly see the man going through his own personal hell. He wants what he can’t have. And so he fights to battle those demons living in his own memories. He fights for his own freedom and the demons that still hang around, he drinks away. I actually loved Xander’s inner-most private thoughts. I loved seeing the turmoil through his own vantage point. What I wanted, though, I wanted to see him fight harder for what he wanted. I wanted a tad bit more aggression, and to be honest, I would have loved some moments when he fought with people other than his friends. Rina Kent talked about him coming back all bloody and that it *wasn’t his blood*. I would have loved to see that fighter’s side of him a bit more.

Whereas Xander exercises his demons by fighting, Kimberly exorcises hers on a scale far deadlier than her ex-best friend. She bottles them up until her body and her mentality has had enough, and then she purges those emotions out in forms far more dangerous and deadly. And here is where the major triggers come into play. Kimberly not only suffers from anorexia and bulimia she also sufferes from depression and mental health disorder. And this is where the topic of cutting and Kimberly’s suicide attempts are played out. I’m not going to lie, these moments are tragic and traumatizing. My heart broke over and over again for Kimberly and her feelings of being all alone in this world. Her feelings of feeling worthless in her body, mind, and soul hit at all of my heartstrings. She felt like there was no way out in moments and succumbed to the darkness. But through the darkness there was almost always a little light that helped pull her away…. So be warned, Kimberly’s POV is VERY DARK!

I loved the first half of Black Knight and, in all honesty, I loved the last half. The reasoning behind why I rated Black Knight 3 ½ stars is due to how rushed the ending felt. I needed more of a reconciliation period between Kimberly and Xander. For being her tormentor for the past few years, she sure was quick to let him back into her life…. I wanted a bit more struggle from her. No, what I wanted was for her to stand up for herself more where Xander was concerned. This man deserved to grovel in a way that no man has groveled before. He deserved to feel even more devastation aside from what he felt. He hurt this girl emotionally time and time again to the point she felt there was no sense in living life…. And for her to just be like… It’s Okay, Xander….. UMMMMMM NO! I don’t care about the circumstances, make the boy sweat it out for a little bit longer… And that is the only issue I had with this novel.

Overall, I did love their own stories and I loved the fact that they had that happily ever after moment. I just needed a bit more of a forgiveness period than what was given. But other than that, I loved the love story and the twists and turns added throughout the novel. I was on the edge of my seat for a good portion expecting the worst possible scenario to take place.

The novel I’m looking forward to the most in this series is Ronan’s story! EEK! It’s next up in the series! I have a feeling this one is going to be EPIC!